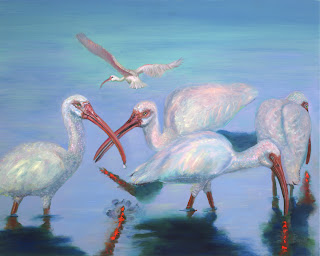 The mascot of the University of Miami is an American White Ibis. The ibis was selected as the school mascot because of its legendary bravery during hurricanes. The ibis is the last sign of wildlife to take shelter before a hurricane hits and the first to reappear once the storm has passed. Miami's sports teams are nicknamed "The Hurricanes. http://en.wikipedia.org/wiki/Ibis

This group of Ibises makes the rounds on our lake each day. There are twelve of them. I call them “The Boyz.” Ibises often nest with Herons and share the lake with them and several other varieties of birds. I think they are trying to show us how we can each be different and still get along with each other. The Ibises are really interesting, if you look close. I became so intrigued with them and how gregarious they are that I am doing a series of paintings on them. This is the first one I completed this week with several more to follow. I'll post them as I complete them.
Posted by Peter Bonk at 2:12 PM 1 comment: