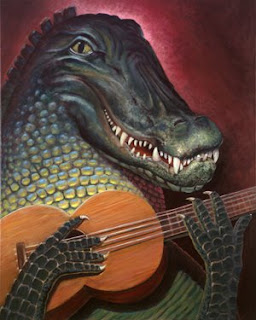 I just added this one today. He started as a commission for Ukuleles and turned out to be one of my better pieces. What do you think?
Posted by Peter Bonk at 9:17 AM 5 comments:

I decided to write out the story of what I was thinking and trying to create when I painted my recent works. I wrote the stories from notes in my studio log and will eventually add these as pages in my website. 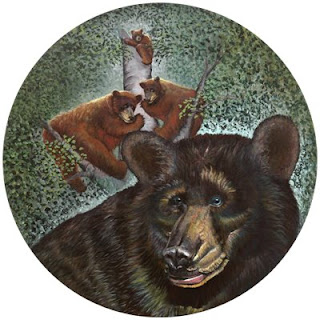 “Too Big to Climb”
A large black bear finds he is too big to climb the tree behind as his friends and family have already done.
Sometimes we find we have responsibilities to ourselves and to other people in our lives. We find that we must put our nose to the grinding wheel and forge ahead. It seems that it gets more and more difficult to do some things as we age but we somehow find more and more courage to succeed in the face of diversity. Perhaps its because we are wiser. Perhaps its because we are too big to climb and just too old to run. 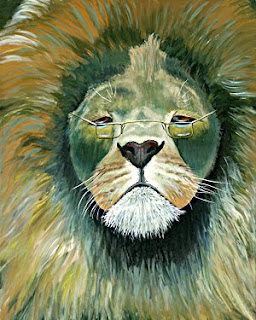 “Even Lions Get Old”
An older wise lion looks at you through his spectacles. At one time he was a fierce competitor who didn’t need things like spectacles to see things. He was the strongest and fastest in his pride and so confident. Now he might be the wisest but, certainly, not the strongest and the fastest. 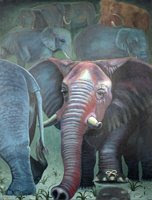 “The Fear of Forgetting”
I find that I get so busy painting and teaching that I sometimes lose track of things that are the most important to me so I tried to express this in a painting. I chose the elephant as he is an icon in our culture and known for “an elephant never forgets.” There is truth in this axiom as an elephant is the only known animal that will seek revenge even after many years.
In my painting the elephant is trying to remember who he is. The parades of elephants in his past are his ancestors all the way to the mastodons of prehistoric times. It’s not enough that he is an elephant; he has to tie a string on his toe to help him try and remember who he really is. 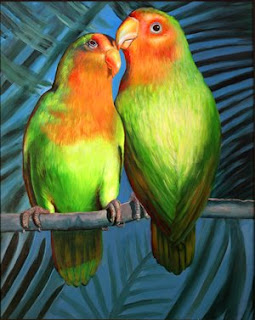 “Lucky Bird”
The larger male parrot or lorikeet realizes his mate adores him and gives a look of both pride and recognition in that he feels he has not done enough to deserve this praise and loyalty. 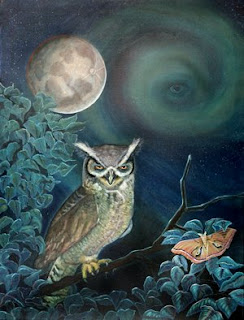 “Eyes of the Night”
The night is my favorite time of day. There are many creatures who live in the night in their own night ways. One of them, the owl, has many meanings in our culture not the least of which is wisdom or that of a messenger. In “Eyes of the Night” I tried to represent the awe one feels when one looks up at the sky and hears the night life around them and realizes there is a supreme power behind it all that we are, simply, too small to fully grasp. 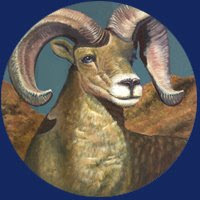 “Smokey Mountain Ram”
In a trip to the Georgia Mountains this summer my wife and I toured many of the towns of this area including Hiawassee and Helen. It often struck me that the people of this area have a great deal of pride and identity with the mountains. Helen, for example is made to look like an alpine village in the Swiss Alps. Later I learned that the park service was reintroducing mountain goats and big horned sheep into the mountains of the national parks. I was inspired to paint one of these rams with gently sloping mountains in the background representing the smaller Smokey Mountains but mighty in the hearts of the residents. 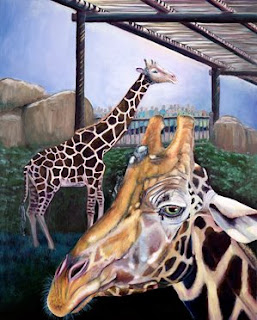 “Boris Loves a Crowd”
While painting at the Lowry Park Zoo in Tampa, Florida I found one of the older giraffes of particular interest. His name is Boris and he kept reaching over the fence with his long neck and looking in on my painting almost touching it as he inspected what I was doing. Boris enjoys attention as we all do. It seems, sometimes in our culture that older people are forgotten and not appreciated. Even though our seniors have a life time of wisdom and experience the people in our culture seem only focused on material things and how much more they can get today. I thought to myself, it’s good that Boris get’s so much attention. 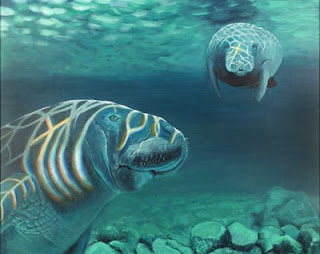 “Manatee Heaven”
These large lumbering sea creatures go about their peaceful daily lives in their underwater worlds with light shining through from the world above. Sometimes this light forms unusual patterns across their backs and faces. Perhaps there is meaning in these patterns. Perhaps it is only another aspect of the beauty in the world and how it manifests itself on these living canvases.
Posted by Peter Bonk at 2:50 PM 3 comments:

As I develop ideas for paintings I make sketches and notes in my studio journal. It's a small black log that I take with me every where. In this blog I plan on entering notes from my journal and developing them further, hopefully with input from you! Who knows your idea may end up in a painting.
Posted by Peter Bonk at 1:48 PM No comments: